skip to main | skip to sidebar

[Warning: Game of Thrones spoiler ahead]

Remember S4E08 of GoT? The Mountain and the Viper? It would be fair to say no other scene on TV or the big screen had as much of an impact on me as the one where Oberyn lets himself be brought down after doing everything perfectly (well, almost everything, if you ignore the way he loses his first spear). I couldn't bring myself to rewatch the scene for quite some time. Might even have been a bit of PTSD there.

The reason I bring this up is because of this: 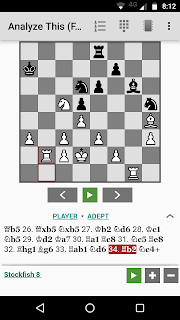 That's me playing White against the computer, having just moved my rook suicidally to b2, with the Black knight's upcoming fork to c4 the equivalent of Gregor Clegane tripping Oberyn.

It may look like just another blunder in a chess game, but to me it was the closest I had come to winning (unaided by the use of a chess engine) against the computer in Adept mode (that's the highest level at which I have discovered that I can stay in the ring and give as good as I get). I had managed to build an impressive material advantage, and a careful exchange of pieces would have left me with a hopefully easy-to-win end game.

I guess I could have continued the game with the still-present (albeit diminished) material advantage, but knowing the bastard that is the computer, it would have worn me down into committing another blunder shortly. That's the problem with playing against an emotionless automaton.